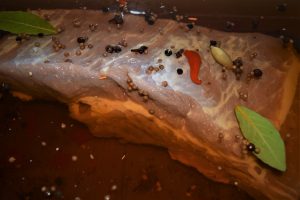 Notes about curing meat by brining 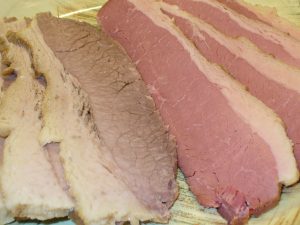 This brining recipe for corned beef brisket uses strong brine strength of about 15% (weight of salt to water), a modest amount of sugar, and optional curing salt containing sodium nitrite.

But nitrites also give products like ham and corned beef brisket a characteristic pink color, as well as contributes desirable flavors.

Without sodium nitrite, the meat will be gray rather than pink, and the flavor will be slightly more sour or pickled and more like roast beef than corned beef. (see photo on left)

For more information about curing meat, read about brining and curing corned beef and game meat.

Traditional corned beef dinner accompaniments include per person, 1 medium peeled potato, ¼ head cabbage, and 1 large peeled carrot. The vegetables can be added to either cooking method during the last 30-40 minutes, or baked or steamed separately and served with the corned beef. Arrange the cooked vegetables around the sliced corned beef on a large platter.