How to ferment half-sour cucumber dill pickles in brine 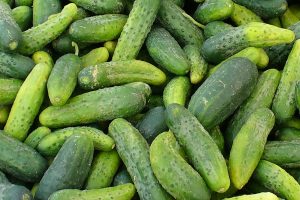 If you love crunchy pickles, be sure to try this recipe for Half-Sour Pickles, which are extra crisp, refreshing, and not too salty. So why are they called “half sour”? To make pickles by the traditional method, a weak brine of about 6% is used and the cucumbers are allowed to fully ferment, a process that takes 1 to-4 weeks.  For “half sour” pickles, a very weak brine of about half strength is used, and the cucumbers are only allowed to partially ferment, which makes them less sour as well as less salty as leaves them crunchy and very fresh tasting. To stop the fermentation, the pickles are stored in the refrigerator. Eventually, half-sour pickles will continue to “pickle” in the refrigerator, turning darker green and becoming softer over time. So make a batch, but plan to enjoy them within a few weeks.

Half-sour pickles are satisfying in every way: quick and easy to make, pretty to look at, and supremely crunchy, with a light, crisp, not-very-sour flavor that’s similar to fresh cucumbers.

For information about fermenting other foods and seven other methods for preserving all kinds of meat, fish, and produce, get the book The Home Preserving Bible by Carole Cancler. Shop for some of our favorite food preservation tools and equipment on the Amazon marketplace.