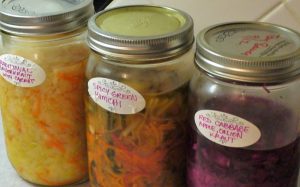 Salting is an old-fashioned fermenting or curing method for preserving vegetables. This technique was a popular food preservation method in the early twentieth century, especially during the first and second World Wars. Layering food with salt to preserve seasonal vegetables was promoted as an alternative to canning in order to conserve glass, metal, and fuel needed for the war effort.

Overall, the salting method is as much art as science, but very safe and nearly foolproof. Compared to canning salting is quick, easy, and has a lot more leeway. Compared to freezing, it is less expensive and more interesting.  It’s become one of my favorite food preservation methods.

It is interesting to note that the salt does not preserve the food directly, rather plays a very important role in microbial activity. How much salt you use determines what happens: tangy pickled vegetables or near-fresh “cured” vegetables. Or for that matter, spoiled vegetables if you omit any critical steps.

There are two basic methods for salting vegetables: fermenting and curing. Both are a form of pickling.

Salting is best used in mild weather, fall or spring. It is not as forgiving when the weather is very warm (above 75°F), or during cold weather if you don’t have a suitable (room temperature) location while the vegetables are fermenting or curing. Since I live in a temperate climate, I enjoy using the salting technique almost year-round, except high summer. If you live in the tropics or where the weather is more extreme, it may not be your “go-to” technique. 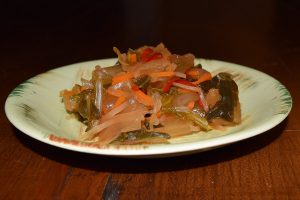 If you have ever made sauerkraut or kimchi, then you have already used the dry salting method to ferment vegetables. Sauerkraut is made by layering raw shredded cabbage with salt. Other sauerkraut ingredients and seasonings are often added, including apples, carrots, beets, caraways seeds or juniper berries, and sugar, to name a few.

Kimchi is made by layering chopped cabbage with salt and seasonings such as soy sauce and ground dried red chili peppers. As with sauerkraut, other vegetables are often added, such as carrots, daikon (radish), and onion. There are at least 200 varieties of kimchi produced in Korea. So you can see that it’s a very adaptable technique.

In addition to cabbage, almost any other shredded or finely chopped vegetable can be included: beets, carrots, radish, turnip, onion, green beans, kohlrabi, okra, rutabagas, corn kernels, shelled lima beans, and shelled peas. Mixtures of any of these vegetables may also be preserved using the dry salting fermentation technique. The sky—or perhaps your vegetable garden—is the limit to what you can do.

Using the same sauerkraut/kimchi technique, if you increase the salt to 20% to 25% of the weight of the vegetables, you prevent the growth of all bacteria, desirable or not. Yes, it’s a lot of salt. By the way, 25% salt is a completely saturated brine. If you add more salt, it won’t dissolve. So 25% is the maximum.

The heavy salt used in this technique is out of step with today’s tastes. You may find that learning to use the salted product requires some experimentation. So, you might want to preserve a small amount (one quart or about 2 to 2½ pounds) of vegetables with this method before preserving an entire crop or bushel of vegetables. I’ve used it with cauliflower, green beans, and tomatoes. All with great success.

Note also that you want to avoid salt concentrations between 5% and 20%, because in this range you may promote the growth of spoilage bacteria, rather than desirable LAB. However, there is a 15% brine-plus-vinegar technique detailed in The Home Preserving. But, I haven’t included that method in this article. For me, the techniques detailed here are more interesting and useful.

Raw vegetables you can use with the high salt technique include thinly sliced celery, okra, and red or green tomatoes, or corn kernels (cut from the cob). Still other vegetables you can preserve with high salt concentration include steam-blanched cut green beans and shelled lima beans or peas. Steam-blanch the vegetables over, not in boiling water, and pat dry thoroughly before weighing to determine the amount of salt to use.

Diced vegetables and small whole vegetables may also be preserved in either or high salt. Since you won’t draw enough water without crushing the vegetables, you must use brine (salt dissolved in water) instead of dry salt. I detail this technique later in this article. If you have ever made naturally fermented cucumber pickles, then you already know this technique.

How to use the dry salting technique 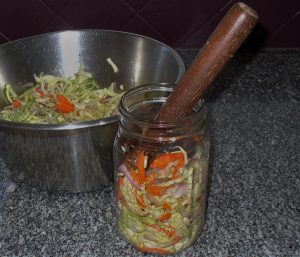 The dry salting technique mixes shredded or finely chopped vegetables with salt, packs them into a container, removes the oxygen (air), and allows the vegetables to ferment (low salt) or cure (high salt).

While the vegetable mixtures and seasonings are something of an art, there is also some science involved. However, the process is quite forgiving. You will experience success every time if you keep all of your equipment scrupulously clean, measure accurately, and follow the steps precisely, which are listed below.

When to use a brine instead of dry salt

In dry salting, the salt extracts water from the vegetables and creates a brine. In brining, you mix together the salt and water and soak the vegetables in it. Therefore, if you want to use the salting technique for larger pieces of vegetables (rather than shredded or finely chopped), you must use brine (salt dissolved in water). For obvious reasons, it’s not practical to layer vegetables pieces with dry salt, since they won’t draw enough juice without crushing them. 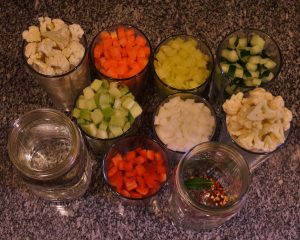 When using brine, you don’t need to weigh the vegetables. You simply prepare either weak brine (5%) or very strong brine (20%-25%), pour it over the prepared (whole, quartered, sliced, or diced) vegetables, and ferment or cure in the same way (steps 9-13).

A few vegetables can benefit from steam-blanching before curing. These include cauliflower florets, whole or cut (1- to 2-inch lengths) green beans, shelled lima beans, and shelled peas. Without blanching, the vegetables may become very firm and require longer cooking when used. So again, it’s a matter of preference. Steam-blanch over, not in boiling water. Be sure to pat the blanched vegetables thoroughly with towels to remove excess water so as not to dilute the brine.

Another use for strong brine is to quickly preserve a crop after harvest until you have time to preserve another way. In this case, add ¼ cup 5% vinegar to the brine. Use the strong brine/vinegar solution to hold washed and trimmed whole beets, carrots, cauliflower (heads or florets), cucumbers, greens (beet, mustard, turnip), kohlrabi, unshelled peas or beans in pods, rutabaga, green or ripe tomatoes, turnips. While these vegetables can be stored in the vinegar-brine up to 6 months, they do need to be put under refrigeration after curing. So storing vegetables by this method tends to be used only as a temporary preservation method today. A century ago, the crock would have been stored over winter in a root cellar—the cold, damp unfinished basement under the farm house. So if you can bury the crock outside or otherwise place it in a cold location, by all means, do so.

How to prepare brine

As mentioned in the steps above, use only pickling/canning salt or kosher salt. Other salts can inhibit the process and may result in spoiled or oddly-colored products. Because salt volume varies greatly from one type and brand of salt to another, measuring salt by volume (cups or tablespoons) is very inaccurate.

In the brine recipes below, I’ve given the weight and volume measurements for pickling/canning salt. If you want to use kosher salt, there is a conversion table for different brands in The Home Preserving Bible by Carole Cancler.

Store prepared brine in the refrigerator up to one month.

If you really get into this, you can measure brine strength with an instrument called a salometer

, which measures the salt concentration in degrees (SAL°). Buy a salometer online or where sausage-making supplies are sold. A salometer looks like a large, bloated glass thermometer. You simply float the tool in the brine and take a reading. So if you’re doing a lot of this technique, a salometer can save you some time. A salt brine hydrometer with a test jar

costs between $25-$80. The test jar is a handy, tall plastic or glass cylinder in which to measure your brine with the floating salometer.

How to store salted vegetables 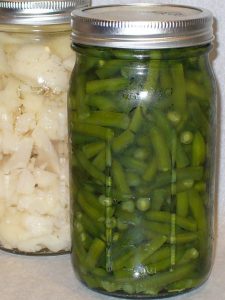 After fermenting or curing, store salted vegetables in the refrigerator up to 6 months. Storage time is shortened if you routinely remove the container to room temperature for an extended period…such as placing it on the dinner table every night. So remove a portion to a small dish, and do not return them to the container; keep them separate.

Keep the brine surface free from scum. Anytime you notice a thin white film on the surface of the brine, be sure to remove it every few days by skimming the surface. “Scum” refers to a thin, clear or white translucent layer.

If the container gets areas of thicker, fuzzy material, that’s mold—mold color may be white, black, green, or blue. Since mold sends microscopic tendrils throughout the liquid, it spoils the entire container. Unfortunately, you must discard product showing any signs of mold. So that’s a good reason to store salted vegetables in smaller containers, such as pints or quarts, even if you prepared them in a one gallon or larger crock.

In addition to mold, soft or slimy vegetables and rotten odors indicate spoilage. Discard vegetables with any sign of spoilage without tasting.

How to use fermented and salted vegetables 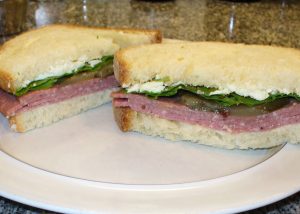 If you prefer, you may rinse fermented vegetables with water to reduce the saltiness or tanginess. Either way, use them like you would relish, pickles, or sauerkraut: garnish a burger or sandwich, accompany roast or grilled meats or sausages, or use them anywhere you want a tangy accent.

When removed from the brine, salted vegetables will be firm and slightly darkened in color. You can prepare and serve them in the same ways you would if they were fresh, including eating raw or adding to salads.

Since the are very salting, soak salt-cured vegetables before using to remove excess salt. Soak vegetables in three or four times their measure of cold water for 2 to 8 hours, or to taste. Change the water several times to speed up the process.

To serve salted vegetables raw, simply drain and pat dry after soaking. Otherwise, prepare cured vegetables as you would any fresh vegetable: steam or saute and toss with butter, top with cheese sauce or cream sauce, or use in a stir-fry.